I’d been really interested in this particular Japanese Urban Legend for ages, and when I watched John Wolfe play a game inspired by it I decided to properly dig in deep and do a post on it. Keep reading to find out about the Japanese Slit-Mouthed Woman (and how to escape her)…

Kuchisake-onna (also known as cleft mouth woman, slit mouth woman and 口裂け女) is a malevolent Japanese ghost that dates back to the Heian period (794-1185, the last division of classical Japanese history named after the capital city Heian-kyō when Buddhism and other influences from China were high), and a lot of the sightings come from the Edo period (1603-1868 under the rule of the Tokugawa shogunate, filled with economic growth, a strict social order and an enjoyment of arts and culture). She is the ghost of a woman mutilated by her husband who returned as a malicious spirit; a living serial killer with a Glasgow smile who approaches her victims with seemingly harmless questions before killing them with a pair of scissors. 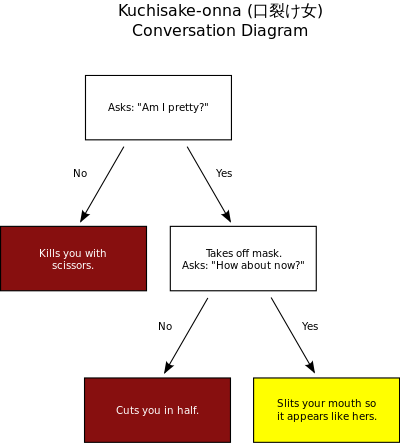 It is said that she covers her mouth with a cloth mask or fan or scarf and asks unsuspecting lone travellers if she is pretty (Watashi kirei?). If they answer yes, she will take off the mask to reveal her mutilated face and ask how about now (Kore demo?). If they say yes or scream, she gives them the same wound as her, and if you try to run away she will simply appear infront of you; if they say no she walks away but follows them home and brutally murders them later that night, so there’s no real way to win, right?

Well apparently people during the Edo period claimed that giving her answers such as “average” or “so-so”, flipping the question back on her and asking if you’re pretty and throwing money or hard candy at her would confuse her long enough to buy you time to run away (but whatever you do, don’t look back). You can also tell her that you have somewhere to be and she’ll apologise and excuse herself.

Some stories describe her as a former patient of a mental asylum who escaped, however the origin story goes that she was a beautiful young woman in a village during the Heian period married to a samurai. The woman would roam around and attract a lot of positive attention from men, which she would acknowledge by asking people if she was pretty, and they would always reply with a very strong yes, giving her a lot of confidence. She decided to have an affair with a noble soldier and thought she could get away with it, but her husband inevitably found out. He asked the soldier “Why her? Why my lady rather than all other women of the village?”, and he replied, “For she is the most beautiful of the village, I cannot pass up such an opportunity”. The samurai took that as an honest intention and let the soldier off as he was poor so not many good things really happened to him (seems sexist to be honest), however he knew his wife was nothing without her beauty (yikes), so he cut her mouth open from ear to ear and asked “Who will think you are beautiful now?”. He later killed himself out of regret, and then she killed herself out of shame and sadness, doomed to eternally avenge her pain.

In the more modern legend she walks around in a surgical mask so she appears innocuous as a lot of people in Japan do this to protect themselves from illness or pollution. It is said that her injury occurred as a result of plastic surgery gone wrong. The doctor performing her surgery was wearing a ridiculous amount of hair gel and when he leaned in to make the incision she jolted to recoil from the smell and he ended up slicing her mouth open. People say that as a result of this if you encounter her and say pomade, she will run away. 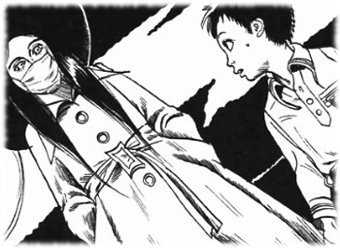 The rumours of alleged sightings began to spread in 1979 around the Nagasaki Prefecture and even spread wildly throughout the whole of Japan. There were even reports of schools telling kids to go home in groups escorted by teachers for safety, and an increase in police patrols throughout the country due to sightings of a woman chasing and attempting to abduct children. In October 2007 a coroner in Japan found some old records from the late 1970s about a woman chasing kids who was hit by a car and died soon after, and it was discovered that she had severe head trauma and facial lacerations that looked like a jagged bloody smile, thus presenting a possible cause of the mass hysteria at the time. Reports even begun to spring up in South Korea and in 2004 there was a woman (Icheol gan Saieol) who was said to chase children wearing a red mask. There are also a lot of movies about her such as Kuchisake-onna and Carved, and there’s even the idea that the joker is based on her, as he can be seen sporting the same jagged smile.

There are actually some survivor testimonies: there was a boy named chance who encountered her while on a shortcut through the woods and when he saw her he grabbed his crucifix and chanted the devil’s curse (“I banish you to the Shadow of death, I corrupt you to the netherworld from which no one has come from. In to the dirt no being should ever cross.”). He thought that this would make her simply run away, but he claims that demonic hands came from the dirt and pulled her down into the earth and as she sank she said, “I will be back, and I will tear you to pieces.” This story sounds a bit far fetched, but that last sentence didn’t fail to give me the chills when I read it.

Another one states that a man named John was walking home one day and say her so he tried to run away, and as a result she snapped his neck. John didn’t die straight away and was found and rushed to hospital, however the damage was too great and right before he died he said her name.

In the Edo period they blamed a lot of the slit-mouthed woman attacks on shape-shifting kitsune playing pranks on young men, and in the 20th century they blamed them on serial killers, ghosts and mass-hysteria resulting in a lot of the sightings. There’s also the idea based on the original legend that it was created as a morality or cautionary tale about the importance of staying faithful.

There haven’t been any recent sightings, but terrifyingly her legend says she’ll come back one day but she won’t be at all beautiful and she will instead be decomposed and all the more vengeful. Whether it’s a true story, a cautionary tale or simply the result of mass hysteria, there’s no doubt that this legend is truly terrifying, and it really makes walking alone at night seem that much more sinister…